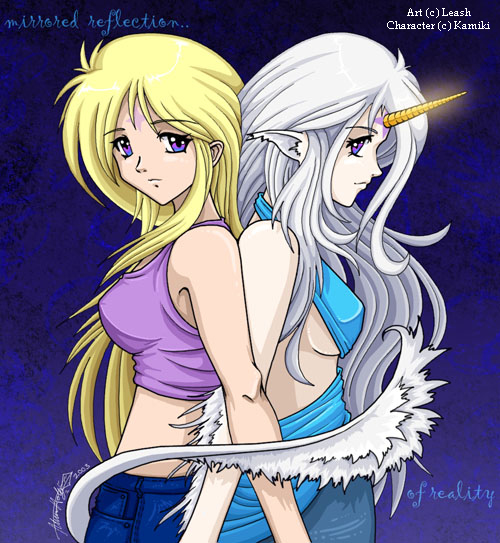 Apparent age:  14 - 19, quite depending on how she acts and carries herself

Eyes:  a constant wave of shades of green, blue, and lilac

Appearance:  Being a shapechanger, Acacya has three forms.  Her "normal," or most natural form is her mixed-form.  She appears to be a young teenage girl, with white deer-like ears, silvery white hair, a long lion-esque tail with feathery fur, and startling eyes that are always shifting color.  She has tufts of the silvery hair on her elbows.  Her legs from the mid-thigh down are that of a unicorn (white and the shape of a well-muscled deer with cloven hooves), she has a long, thin horn of gold spiraling out from a light blueish purple star on her forehead.

Her unicorn form is that of a magnificent magical creature.  The size of a full grown horse, but the shape and stature of a buck.  Her fur is stark-white, with a mane and tail of whispy, silver hair:  so flowy and luminance it almost resembles liquid.  Her hooves are cloven and crystal, covered mostly by Clydesdale like "boots" of fur.  Her tail is the same as her mixed-form, long and thin, with the feather-fur trailing up the length and collecting on the end a brush-like formation.  She still has the star on her forehead, and the long spiraling gold horn.

Her last form is her human guise.  She looks as a teenage girl with a birthmark on her forehead (a slightly paled version of the same star that appears on her other forms), and long light blonde hair.  Her eyes, though the shifting of colors is slower and less noticeable, continue their liquid transformation between multiple colors.