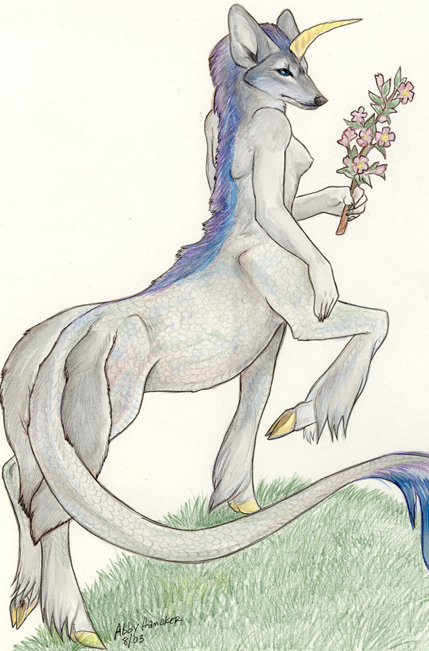 Physical Description:  The Ki-Ritsune Ryu is a being that resembles a kind of Asian chimera-centaur.  Her upper torso (where a true centaur would be human) is that of a beautiful  anthro silver vixen. Her fur is blueish silver, and white underneath. She has bright blue violet eyes, slightly almond shaped. She also has a curved (like that of the crescent moon) golden horn.  The fur on the back of her neck/shoulders is slightly thicker, and  she has a line of dorsal scales starting at her neck and disappearing into her fur on her back.

Her main body (the "horse" part of centaur) is that of a Ki-Rin, the Asian scaled unicorn. She has dark grey fur, with white-silver scales.  The shape is that of a thick deer (or light cow), with cloven hooves.   She has three tails:  the two outer tails are fox tails (dark grey, with silver tips), and the middle tail is a very long and winding scaled tail like that of an Eastern dragon.  The fur on the tail is a mix of silvery blues, whites, and violets.

Personality:  Very little is known about the creature.  She's a very rare fae-creature that only shows herself to a select few and has never been known to speak.  It is unknown if she is a single creature, or if there is a small group of Ki-Ritsune Ryu that travel the world and the fae-realm.  Two have never been together, nor have two sightings occurred concurrently.  She/They appear female (they have breasts on the upper torso), but it is unknown if she/they are truely female or androgynous.

*Note*  There is some non-sexual artistic nudity in these images.

A NOTE for artists drawing Kiritsune Ryu:  K.Ryu does not wear human clothes.  This is not to be "sexy," its just the way she is.  However, if you are uncomfortable drawing nudes, feel free to either draw her with her arms/props covering herself, or draw non-detailed "furred over" chest  to give that kind of Barbiedoll undefinition.  It won't bother me at all.