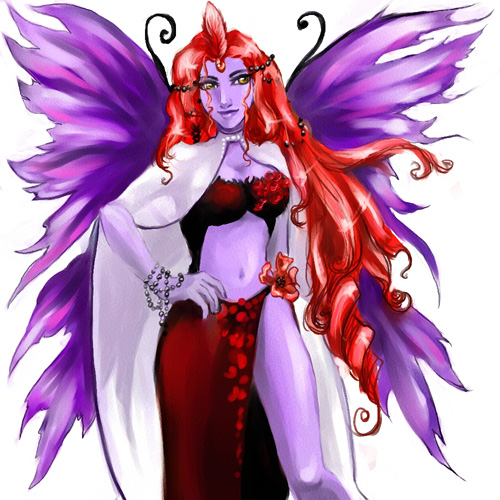 Appearance:  Purrpurr has purple skin and bright red hair.  Her eyes are golden yellow.  She has a red jewel on her forehead with white-tipped red feather headdress (giving it a fox-tail look).  She sports a pair of large, purple-and-black monarch butterfly wings.  Her perferred clothing is always silky white with black lace trim.  Being part nymph, she's extremely attractive to both sexes.  Her movements when she walks seem very deliberate and seductive.

Personality:  As a teen, Purrpurr is curious, friendly, and cheerful...most of the time.  Life hasn't been as chipper and happy as it used to be, and recently she's been quite jaded.  She's become emotional and untrusting of men.

History on Gaia:  Purrpurr was given to Kamiki by Anya for Christmas.  All she was at that point was a flower pot, that grew quickly into a very unusual looking purple plant.  After a few weeks, the plant turned into a small child, which Anya called "Purrpurr" because of the cute, trilling purr noises the girl was making.

Purrpurr's best friend is  Mordath, Sabin's fa'e.  She's also close with Sati and Silver, and is getting to know Yin, Astaroth, Kia, and others.  She dated Morion for a while, but after some tramatic times in his life (the death of his guardian, and a few infidelious kisses to another girl), Morion broke off romantic relations with her.  Purr was crushed, and ran away to the Fey Realm to cope.  Things went exceedingly bad there, as well.  She sought out her old kingdom, and in the process came across King Oberon, her husband in her past life.  He ended up seducing her, forgetting to mention to her that he was remarried until the next morning.  Very upset, Purr rushed home to Gaia.  Morion and her seem to be trying to work things back out... slowly.

History of her Past Life:  Purrpurr is the reincarnation of the Queen Titania.  More info coming soon!